This copy was provided by NetGalley in exchange for an honest review. The post below may contain affiliate links which at no cost to you may provide a commission to this blog. 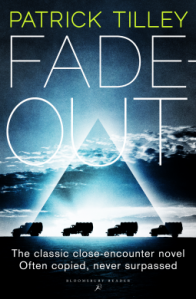 Find it on: Amazon | Book Depository

Fade-Out was first released in 1975 and aside from a newish cover this edition remains the same as the original. Whilst the quote on the cover suggests this is about an alien encounter, really the story is set around humanity’s, particularly America and Russia’s, response to the threat. Being set in the Cold War era adds tension to the obviously strained relationship between Russia and America, and how they handle the fact that alien crafts have planted themselves in both nations.

If you go into reading this expecting Indepence Day you will be disappointed. It’s certainly more along the lines of Arrival. Much of the novel is spent with scientists trying to understand the nature of the alien ship and it’s reasons for having arrived on Earth. It’s clear from the outset that ship has a special ability to block out communications and electricity around it adding a degree of difficulty to the task.

I would describe this book not as an action novel, although it does have it’s moments, but more as a psychological thriller with a science fiction bent to it. The author very much focuses on the “what if” questions around an alien invasion. This novel seems to have aged well, and although others have complained about a lack of female characters, to me this seems highly reflective of government forces at the time. Unfortunately this novel lacked a strong ending with clear resolution, instead leaving many questions unanswered; somewhat disappointing after a strong build up in tension. For that reason I’d rate this book as 3 out of 5 stars.