I’ve been thinking about how I should do my post summing up the Mistborn novels. A quick once over wasn’t really going to suffice so please bear with me as I go to the opposite extreme with a full nerd level post. Now is probably a good time to make a cup of tea and get yourself a snack.

Before we get started, in case you are new here, my previous posts covered some brief notes on Mistborn: The Final Empire and also the problem with Brandon Sanderson (sorry about that title!).

I thought it might be helpful to break up my thoughts on the series into various sections. I’m going to make the assumption that if you’ve read past the spoiler warning that you’ve already read the books and we are all already on the same page!

Scadrial  (mostly focused on Luthadel and the Dominances) 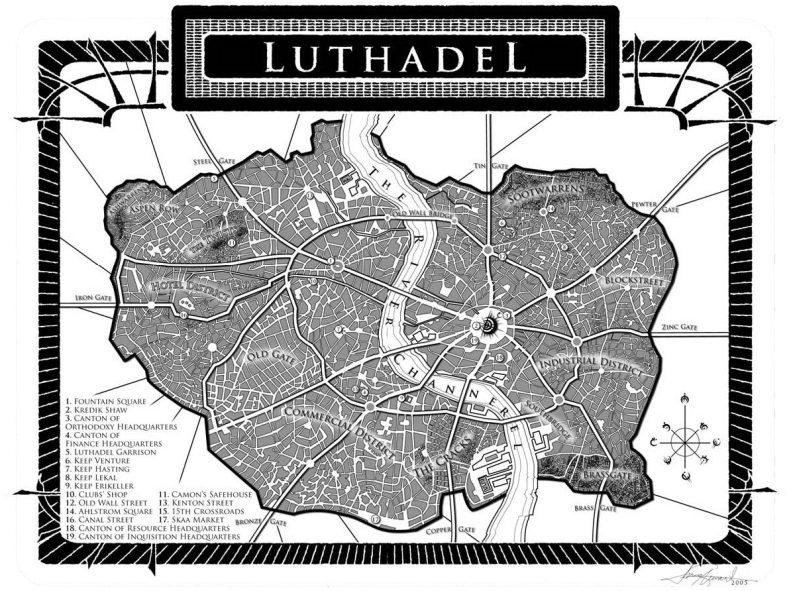 In my mind I imagined Luthadel to be not to different to any major city in the late 18th or early 19th century. The description of the construction and technology available seems to fit with that, and also the idea of the upper and lower classes and their respective living conditions. I guess if you were writing a series based on using magic to push/pull on metals then having a society that is less technologically advanced makes sense. I’m interested to see how this will pan out in the new Mistborn books that will be set in the 1980s. Maybe all the chunky cellphones will go flying. The major difference between Scadrial and Earth is the ash, which is obviously a key feature through out the series. It’s an interesting choice of Sanderson to refer to the “ashmounts” rather than volcanoes. It

kind of reminds you you are in a world similar to ours but not exactly. I like it. Oh and of course I have to mention the mists. The concept of the mists to someone reading book one is so completely different to someone reading book 3. In book one they just seem like an annoying fact of life. I was surprised by how many times my view of the mists changed between hmmm maybe these are really bad to oh wait maybe they are good.

I liked how each book seemed to focus on developing one of the magic concepts.

Obviously we learn the most about allomancy in The Final Empire, but the threads continue long into the series as we discover there are additional unknown metals. Allomancy has to be one of the most interesting magic systems I’ve come across. Sanderson’s concept of Mistborn and Mistings makes for great story telling. I think the story would struggle to get traction if there were just hundreds of Mistborns running around all of the time.

Feruchemy is touched upon in The Final Empire, but really shines in The Well of Ascension. Here we really get to see it being used. Sazed, comes out of his shell and we begin to understand why the Lord Ruler wanted to wipe out the Feruchemists.

Finally everything falls into place in The Hero of Ages as we understand how allomancy and feruchemy powers can be transferred using metal spikes, but also how the Lord Ruler and Ruin (as it was eventually revealed) were controlling the various creatures in the books. This has to be the most out there of the three magic systems. And finally explained why Inquistors had their creepy as eyes. I was getting goosebumps just reading about the Inquistors. I hope this isn’t made into a movie. I do have to say that I thought I had Vin’s bronze earring all sussed mid-way through the last book (and I had it part right,) but I’d completely missed what happened when she didn’t have the earring in.

Actually, I think they way these are all connected had to be one of the cleverest parts of the series, or more specifically how that was revealed to us slowly. I was so sad when the Kandra were all returned to Mistwraiths. TenSoon was one of my favorite characters in the book.  Man, that last book was just like revelation, after revelation. It had to be one of the most satisfying books I’ve ever read. The whole time I was just like:

Vin made a fantastic protagonist and she really grew as a character over the series. The confident Vin the allomancer at the end of book 3 was vastly different to the shy little girl in book 1. I always found her rather likable. In some books you read the main character’s actions or thoughts seem to cliche, but Vin seemed very real and down to earth even when she was the Emperor’s wife.

Well we have to love Elend because he is a book nerd. I liked him in book 1 for his attitude at the balls, he was a wee bit pathetic in book 2 but that was all part of the plot really, but he certainly redeemed himself in book 3. Being made into a super strong allomancer probably helped things a bit.

From a guy who seemed like a bit of a book nerd to becoming the Hero of Ages. When he took hold of both Ruin and Preservation and used his knowledge to put everything right in the world, how can you top that? I felt all warm and squishy inside.

So many characters on this crew. I think in the end Breeze and Spook were my favorites from the crew. Perhaps because they both had larger roles in the final book.

He seemed like a pretty terrible guy for most of it, but he sort of thought he was doing the right thing? He turned out to be a bit more complex than he first seemed. I mean a lot of it was clearly for his own gain, but he did kind of try to stop the world from falling apart.

The plot is also one of the best parts of these novels (wait, haven’t you said that about everything so far). I’m giving Sanderson points for being able to a) create suspense, b) have some serious action happening all the time, battles galore and c) amongst all of that carry out some pretty epic character development.

I love all of the battle scenes, and the mistborn fights, and the ballroom dancing. Oh man, that scene where Elend and Vin arrive at the ball unexpectedly and make everyone’s jaws drop.

My toss up for my favorite twist is either that the mists were actually part of Preservation and were making skaa ill in order to snap them into allomancers OR that Ruin had changed the words to the prophecy from “stop Alendi or he will take the power from the Well of Ascension for himself” (paraphrased, I’m too lazy to look it up) to “Stop him or it will release the thing it contains” (oh wow that’s a terrible paraphrase).

I loved all of the books. Can I suspend my thesis until I’ve finished reading all of Sanderson’s work? No seriously, I’m quite worried if I pick up anymore I will have written off the rest of my evenings for the year.

This long post still really only scratches the surface, so please feel free to a comment below and we can keep the discussion rolling. 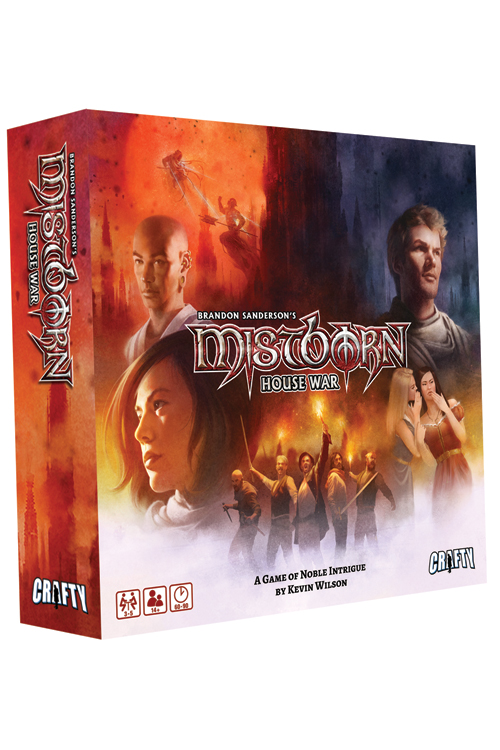 Here is the description of the game from BoardGameGeek:

Become the head of a Great House of Luthadel in this game of negotiation and betrayal set in the world of Brandon Sanderson’s Mistborn novels. Contend with myriad problems plaguing the Final Empire — rampaging koloss, disease, social unrest, even the heroes of the novels — and with every step jockey for the Lord Ruler’s favor. At the end of the story, will you rise to power and prestige — or fall in ruin and disgrace?

Mistborn: House War is a semi-cooperative, resource-management game set during the events of the first Mistborn novel. Three to five players assume the roles of various factions and must work together to solve the “Problems” facing the Final Empire. In order to solve these problems players must expend a certain combination of resources, but in return they receive Favor from the Lord Ruler.

Each round, players produce resources (food, money, prestige, skaa, warriors, and atium) in different proportions and combinations based on their faction. You can convert between different resources to get something that is missing, but in the long run the players must work together, pooling their resources, to succeed.

There are four tiers of “Problems”; at the start of each turn a problem is added to the board in the corresponding column and each pre-existing problem moves up one tier. If a problem passes tier 4, than it is said to “Erupt” (a reference to the novel) and it causes various problems for the players, such as increasing the level of “Unrest” or giving players “Disfavor”. The main part of gameplay is the negotiation between players to solve these problems. Anything except Favor gained in previous turns can be negotiated: resources, Personality cards (which can have a variety of effects), out-of-game favors, etc.

Has anyone played this?

I’d love to hear your impressions. I’m not sure whether I want to curry favor with the Lord Ruler. Mr NW and I love a good board game but apparently this does not ship to New Zealand, which is a bit of a bummer. There is a work-around for getting stuff here, but at extra expense I’d like to know it is worth it first.

What were your thoughts on the Mistborn Trilogy?